That is what I tell Baby Boomers when I talk about “E. T.”

I don’t think it is possible to duplicate that experience. There was nothing like it (I know–movies peaked at 5 years old for me–what?!).

I remember I went with my mom and my best friend at the time, and we all were sobbing like two-year-olds after a tantrum when we were walking out of the theater. I can still feel my warm, caked skin where my tears were drying on my face. I know I’m not painting a very appealing picture here, but the film utterly touched me.

So that was the crying. The range of emotions that I went through when I watched the film is what I remember most about it. “E.T.” starts out with many suspenseful moments like they are preparing us for a horror film. The mother ship landing, the chase in the woods, the baseball in the shed, and the first time we see E.T. face-to-face. 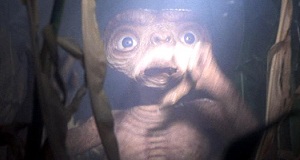 Then the film becomes a buddy movie/coming of age story that is one of the best ever captured on film.

Fear, joy, sorrow, despair, loss…just to name a few emotions that drip from the screen.

I didn’t get to see “E.T.” again for a very long time. There was the occasional television premiere, but my bedtime never allowed for a finish living in the Mountain Time Zone. The film premiered in 1982, we didn’t get a VCR until 1986 and Amblin Entertainment didn’t release “E.T.” on VHS until 1988. That doesn’t seem like a long time now, but when I was a child in the 80s, six years was a long time to wait to see your favorite movie again in it’s entirety.

I had moved on at that point to other films that did not wait so long to be released on VHS.

I’m excited to talk about those movies…but in a different way. I feel that “E.T.” has set up my interest for every next film for the rest of my life, and for that, I am grateful.