The interesting thing about this next movie is that for the longest time after it was released, there were multiple pop culture references that people used all the time.

Two decades removed from the Cold War now, this film has lost its pop culture reference appeal and is now used to date dinosaurs like me when we quote it.  It is one of those films that you watch now and think, “Wow, so outdated.”  A lot of the things that were covered in this film were talked about for the first time.

Using computers for war. Having computers on your desk at home (I know, back in 1983, not everyone had a computer at home on their desk…crazy).

I’m going to list a few pop culture references from this film and you let me know if you’ve heard them before by commenting:

The use of the phrase “Launch Codes” which was used in about a million other war movies after this one.

There’s a few.  The film was very anti-computer and paranoid with that message.  Not only have the people we elected put computers in charge of our future, but they don’t have a fail safe if the computers were ever compromised.  Talk about putting the public in danger.  I think this film is one of the subconscious reasons my parents were always afraid to get a desk top.  What if it tried to kill us? I kid….slightly.

“War Games” is about a smart “computer savvy” nerd that does not do well in school mainly because he is bored and has figured out how to use his computer to change his grades.  Why work when you don’t need to?  This general boredom that he has leads to trying to impress a girl (not played by Kerri Green—sad face) and he learns how to break into the national defense system from his desk top.  He simulates a game of “Global Thermonuclear War” that appears on his computer as well as the national defense system’s screen, and they do not think it is a “game.” 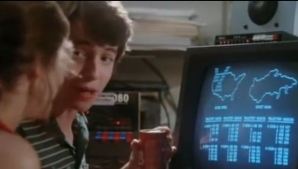 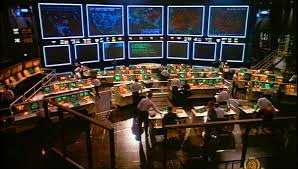 For it’s time, this was a very entertaining film.  The public did not have the knowledge of computers that they have now and were easily drawn into the possibility of something like this happening.  We fear what we do not understand.  Basically, I didn’t get a computer until I was in college.

I really liked the acting and the writing and again, I bought the child doing adult things and eventually being the one that has to fix the mess he created.  He did get a little help from the man who created the system, but it was his smarts in the heat of the moment that saved the day.  Another 80s kid that could accomplish anything.  These movies were all over our culture.  Of course we thought we could actually be POTUS one day.  We could save our town, save a different world in a different universe, and even prevent real life Global Thermonuclear war.