This next movie was like “E. T.” and “Goonies” banged and their nerdy kid was reproduced.

It starred a very young Ethan Hawke in one of the most likeable roles ever written and an equally young (and slightly chubby) River Phoenix.

The camaraderie that you find amongst the teenagers in “Goonies” you’ll find in this film, but on a friendlier level.  There is also the family-fantasy element that is “E. T.”

Hawke plays Ben Crandall, one of the most enthusiastic and positive young teenagers that I can recall in a movie.  He gets bullied and beat up, but he doesn’t dwell on it and allow it to last longer than that moment.  “Onto the next now” is sort of the attitude of the character and it is inspiring, especially for an 8 year old.

One day he is rescued from the bully by a loner for no apparent reason.  Ben eventually tracks down Darren Woods in order to thank him.  Darren is resistant at first, but realizes that he did do it for a reason, he’s tired of being alone with nothing to do and would like some friendship.

Enter Ben’s best friend–the hefty/nerdy–Wolfgang Muller (Phoenix) and we have everything we need for another 80s coming of age adventure in the “Explorers.”  How can you go wrong with a character named Wolfgang?

Everything changes when the three young men learn that they have shared the exact same dream to the littlest detail.  They are given subtle clues in these dreams on how to develop a technology that….you know what, I feel that I have said too much already.

What you need to understand about this film is that I saw a River Phoenix that I was not used to, and he shines.  I’m trying to think of an actor with more talent at his age and the closest would have to be Leonardo DiCaprio.  Phoenix delivered comedy so well and was just as effective with drama too (“Stand By Me“).  His comedic timing in moments in this movie is what makes it a watchable film for the first hour of the picture. 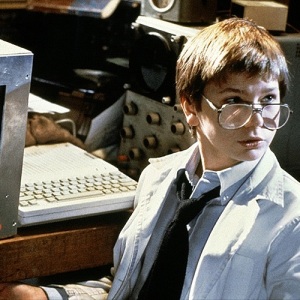 The chemistry of the three young actors was great, and all three gentlemen knew their roles.

River = believable as a child genius and comic relief; not deliberately, just circumstances.

This is another family film that I cannot wait to share with my son some day.  All three of the characters are good people and we cheer for them.  They are not motivated by self-indulgence or fame.  They are motivated by their dreams (literally in this case) and love the idea of being able to go see what can be seen.

There are a couple of twists that I found well crafted when all things are said and done and the movie ended up being something way more than I expected.

Plus, the laughs keep coming in unexpected, clever ways.

Wasn’t that what the 80s were?

11 thoughts on ““What do you mean? You can hardly see the strings.””