It is with a heavy heart that I write this next one.

I had a brilliant plan.  One of my favorite childhood actors was recently nominated for an Oscar after a lifetime of putting in time with his craft.  He finally got a role deserving of him that would allow him the recognition from his peers that he deserved.  I was going to turn this one in with energy after he finally received the award.

Things didn’t work out as planned.  Michael Keaton did not win the Oscar for best performance by an actor in a leading role.

Awards for art are bullshit any way.  There were probably 10 people this year that could’ve won that Oscar.  Timing is everything.

Michael Keaton in “Mr. Mom” was such a likeable character as the dad that lost his job and stays home to take care of the family while his wife goes back to work. We learned how to do mom’s old stay-at-home-job with him along the way.  How to drop the kids off at school, how to change diapers, what daytime TV to watch, what daytime TV not to watch, and who you should never allow into your life as a stay-at-home-dad.

There is also a great scene where he has to go grocery shopping for the first time with the challenging task of purchasing feminine hygiene products–classic Keaton scene.

I always enjoy scenes where he has to play uneasy or in discomfort of some kind.  That is where high comedy is at full view.

The conflict of adjusting to this new life change is a part of the story, but there is also his wife’s boss who is a misogynist that has the hots for her.  Watching Keaton measure up to her boss when they first encounter each other is priceless. 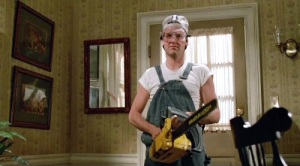 The movie is actually a very simple, light-hearted comedy that is fun for all ages.

Was “Mr. Mom” the new American Masterpiece?  No.  Was it a great family comedy? Absolutely, and Michael Keaton was the next new great actor that I wanted to see.