My parents are not big fans of Eddie Murphy.

I didn’t get many chances to watch Eddie Murphy in his early career because of the language content of his movies.  All of my friends were allowed to and talked about it at school.  I was jealous and begged my parents, but they stood strong.  Years later–*clears throat*–YEARS LATER, I appreciated that.

There was just one movie that fell through the cracks.

It’s the story of a man that spends his life finding children that are missing.  A woman sees him on a local television show in LA announcing the latest missing child that he is searching for.  The woman seeks him out and approaches him for some work.  He reluctantly takes the job and sets off on an unexpected investigation/adventure that takes him all around the world and back. 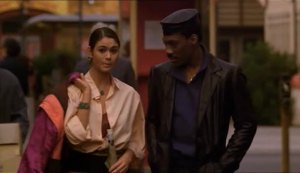 “The Golden Child” was another eclectic movie.  There was obvious humor, Eddie Murphy was in it.  There were exotic locations, fantastical villains, a bad ass karate-chopping heroine, dragons, gargoyles, and of course magic.

My parents were reluctant.  After all, it did have that “filthy” Eddie Murphy in it.  So they had to screen it of course.  They were only willing to even screen it after they heard me and my cousins talking about it.  My cousins had seen it and enjoyed it.  My mom started asking them questions:

“Was there a lot of swearing in it?”

“Was there a lot of violence?”

We found out what that meant and there was none of that in it either (unless you count the topless dragon).

When I watched it, I found it very unexpected.  I didn’t just enjoy it because I finally got to see an Eddie Murphy movie.  I actually enjoyed the story, the characters, the action, and the humor was just a bonus.  My favorite scenes are the ones that involve Eddie Murphy and Charles Dance (you know, Tyrion’s dad). 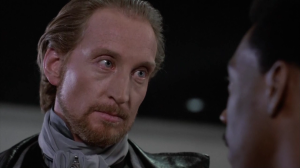 Dance is excellent at playing a man that is built to frighten you.  Eddie Murphy is excellent at playing over-confident.  As an audience, we’re aware of how dangerous Dance is.  We have seen that he is not human, that he can appear, murder, and be gone.  Murphy is not in on that trick and treats Dance like he is just another man.  This adds tension for us when we see Murphy antagonize him.  We enjoy the humor in those scenes, but we worry for the well being of Murphy as well.

In the end, I decided to watch this movie more than the one time and tried to memorize all of the funny scenes so that I could talk with my friends about them at school.

I did that…my Eddie Murphy impression leaves something to be desired.