That is what I think when I remember this movie.

Prior to this, he was the guy that dressed in drag after work, and the guy that tried to karate chop “The Fonz” on “Happy Days.”

Did he make better movies than this one?

Before this film, he was just another actor, believe it or not.

In “Splash” as a child, Allen (Tom Hanks) falls off of a boat into the water and is saved from drowning by a young mermaid.

They later meet as adults.

Allen does not know that she (Madison–played by Daryl Hannah) is the mermaid girl that saved him or that she is still a mermaid.

Madison the mermaid gets discovered.

He saves her with the help of his hilarious brother (John Candy). 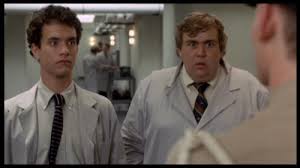 Allen and Madison live happily every after, “Under the Sea!”

I know, it sounds simple…because it is.

I remember it being a very short movie that was able to keep my attention as a child.

It didn’t hurt that I got to see Daryl Hannah’s bare ass as she walked out of the ocean.

I remember enjoying every scene that John Candy and Eugene Levy had on the screen.  Both gentlemen are comedic artists–no one would dispute that.  It was interesting to see how well Hanks held up against these two in comedic scenes as well. Hence, “Hello Tom Hanks.”

Watching Levy as the foil throughout this picture is entertaining.  The things that happen to him–some his fault, some not–are ridiculous, but oddly entertaining.  He also gets to redeem himself in the picture, setting up the ending that everybody wants.

In the end, this is a very entertaining and fast moving watch for someone that wants to pop in a simple and creative romantic comedy.

Plus, Daryl Hannah isn’t asked to talk that much, so she isn’t half bad.

6 thoughts on ““I’m really a nice guy. If I had friends you could ask them.””