Without any explanation, some movies just captivate people.

Some movies touch people for a moment in time.

Some movies touch people and continue to move them for years after they are made.

This film touched people for a moment in time.  I don’t feel that it is timeless, except for those people that enjoyed it on its first release.  It is very campy now and does not hold up.

It used to be my favorite movie for a short period of time when I was 7 years old.

It is the boy that stands up to the bullies that beat him which gave the movie its appeal.  It’s obvious that people like the underdog story.  They were very popular in the 80s.  This movie was no exception.

We follow a boy and his mother on the tail end of their trek to California from New Jersey.  Mom is very excited.  Daniel is anxious.

Daniel attempts to make friends, but only finds people that want to hurt and bully him.  There are plenty of moments when he doesn’t do himself any favors.

At the end of the day, it is his elderly Japanese neighbor that comes to his rescue and fends off the bullies that are brutally beating him to injury.

In “The Karate Kid,” Mr. Miyagi becomes a very necessary friend and father figure for Daniel, and he helps him deal with his bullies, but he also helps him learn how to live his life. 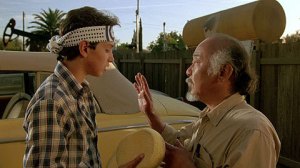 It is the subtle and warm performance by Pat Morita that makes this movie a success.  As a viewer, we see what he is doing with Daniel the entire time, but we get the pleasure of watching Daniel discover the lessons along the way from a very patient friend who has been looking out for him since he moved in next door.

You know a movie is a big deal when people quote it.

I was drawn in by the karate, but there is not much of that.  The majority of the film is the growth that we see in Daniel.  He is truly a character that starts out impulsive and dangerous, and then learns how to control himself and focus–not just at a karate tournament, but with his friend and mother as well.

I remember practicing the wax on and wax off on my dad’s car.  I also remember asking my dad to try and punch me so I could “block it.”  Didn’t work out quite the way it did in the movie for Daniel.

At recess in the school yard we used to do the “crane technique” on each other, and I think everyone was Daniel-san for Halloween that year.  The really cool kids wore the Cobra Kai Gi (I was jealous).

The movie would spawn 3 sequels that did decent at the box office.

Like most sequels, I never enjoyed them as much as I did the original, but I saw them regardless.  I was a true fan and for me to leave this movie off of my list for an impact would be disingenuous.

I watched this movie a lot and it truly entertained me.  I never did take karate lessons and I didn’t really want to.  I was content with the “moves” I learned from this film.  I enjoyed the drama, the humor, and the climax.

After all, shouldn’t bullies lose in Hollywood? (80s Child Proverb)