My dad, like many people, loved the Mel Gibson of the early 80s.

He was energetic, showed great charisma, and seemed to enjoy the material that he chose to perform in regardless of its worth/popularity.

Enter “Mad Max.”  These were some of the first films I remember my dad renting after we got our VCR.  I didn’t really get to see “Mad Max” or “Mad Max 2: The Road Warrior.”  I recall flashes of sounds and pictures as I walked through the room to go outside as I was not allowed to watch those movies yet.  There were a lot of people in black leather, driving large vehicles, explosions, car chases, and “traffic accidents” of an interstate-pile-up-persuasion.  That is just from brief glimpses, on a walk-through or two…(okay 6).

A few years after the release, my dad rented “Mad Max Beyond Thunderdome” and I was allowed to watch it this time.  When compared to the other two films, this one was WAY different in scope.  The costuming was very similar, and I’d say that’s about it.  The locations were well crafted, the open landscape desert visuals were “Lawrence of Arabia” breathtaking, and the performances were what was necessary to move the story–big and BIGGER! 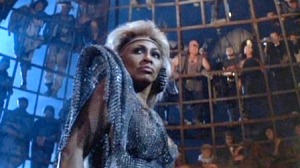 For those of you that weren’t around for Tina Turner in the 80s, she was something more than a rock star.  She was a cross between a legend like Elvis and a POP STAR like Michael Jackson.  So when she decided to take up acting, everyone was like, “Makes sense….”

I write this like it was her first acting endeavor.  It wasn’t…but it’s the one that she will be remembered for, as it should be.

Gibson also flashed a new look that he carried into the early 90s.  His long shaggy hair.  Everyone was used to the clean-cut, sexy blue-eyed ass kicker from the earlier films.  This one was a new Max.  Still the ass kicker, wiser, yet vulnerable in a weird way.  He starts off in the picture getting mugged in the middle of the desert and being left for dead.

Enter the story and the metaphors and you have a picture that I think George Miller and George Ogilvie couldn’t wait to start telling.

Now don’t get me wrong, if you’re looking for an intricate plot, this is not the picture for you.  If you want a very well acted action/adventure that takes you to many different places in a short amount of time with amazing stunts, set pieces, and visuals (costumes, sets, props, locations, etc.) this is definitely the picture for you; and in my meager opinion–very underrated and sometimes forgotten.

Years later I sat down with my dad to do a marathon of the three movies.  It was great to relax and talk through these movies together.  It was something that we always enjoyed doing when we had the time to catch up.  For what they were worth, the first two films were well crafted for low budget action films that used the Australian landscape as a vivid backdrop.  Thunderdome stood out, however, apart from the other pictures.  It was the third child that exceeded expectations tenfold and graduated from the Ivy Leagues.

It’s amazing to me what can be done with a decent story when you have the backing from a large studio for your third installment.

My dad and I never said it out loud specifically to each other, but we could tell that the love and care that was put into the third picture was much needed for the franchise, and delivered way better than anyone could have imagined.

Go see it.  I think you’ll be pleasantly surprised…I hope.

4 thoughts on ““…death is listening, and will take the first man that screams.””