So I feel I’ve written about some “cult classics.”  I think it’s fair to say that “Fright Night” and “Big Trouble in Little China” are what can be considered “cult classics.”  For the definition, I turned to the most reliable source for accurate definitions–UD, baby.  Urban Dictionary is NEVER wrong.  I like all 3 definitions.  I’m going to list them, not in any particular order (maybe):

Something that’s really hip with a select group of people.

Pretty basic.  Cut-and-dry.  Gets right to the point.  I like it.

The next one is really fun if you read it with an English Accent in your head.

A popular piece of work, generally a movie, which has gained a large following.  This following has most likely been around for at least a few years, except for cases of an ‘instant cult classic,’ in which a movie gains instant fame which remains for decades to come.

Not bad.  More detail. A very specific explanation with an example of another type of the same noun.  Good stuff.

A movie that is weird as fuck.

That’s gotta be the best, right?

I like to ask people, “Who’s an underrated bad ass of films in the 80s?”  I think the word underrated makes it an interesting question.  If you just ask pure bad ass, people will throw out Arnold and Sly and Dolph…but underrated adds some dimension.  Its not supposed to be the ones that pop right in there.  For me, it will always be Rutger Hauer.

Now I know I already mancrushed on him when I wrote about “Ladyhawke,” but hear me out.

Arnold, and Sly for the most part were the “good guys.”  Hell, Arnold was a villain in “The Terminator” and in the sequel he was the hero (not to mention in each one in that series following–when he was cast).  Name a movie where Sly played a villain (“Oscar” doesn’t count).  Dolph, like Arnold, started as a villain, but was cast as an action hero bad ass after that until “Universal Soldier” when he fell off the face of the earth.

Get to the point, asshole.

My point is that Rutger was able to do multiple bad ass roles on both sides of the spectrum.  He could play a villain you never wanted to walk across the street from and a hero that could knock you out with his piercing gaze.

villain = “Nighthawks (Sly’s the hero…coincidence?)” “Blade Runner” and “The Hitcher”

Yes, the best “cult classic” for last, “Blind Fury.”  I freaking love this ridiculous movie.  Why?  Because Rutger Hauer made me believe he could be a blind bad ass!

I know, after finally building up to what I normally write for one post, I get to the movie…sorry.

Outside of Rutger Hauer becoming a “Zatoichi” style bad ass (which I have clearly established), here’s what you need to know:

The film features Randall “Tex” Cobb as Slag.  Cobb is one of my favorite typecast, villain actors of the 80s.  He is lights out as the antagonist in this movie, and he gets an epic Darth Maul demise. Cobb was used as the Featured Image for my post on “The Golden Child” and he was also in “Raising Arizona,” which will receive a post from me at some point as well. 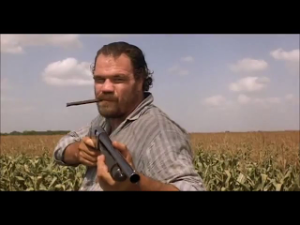 There are creative action sequences from beginning to end, and….

…the hero only knows how to use a sword…because he’s blind.