I always called this next one, “Raiders Lite.”

The opening montage of the film is hilarious.  It is narrated by our lead character (unbeknownst to us in a first viewing). The scene unfolds and a very vile man is going to rape and murder a faceless woman, until she pulls out a hidden knife from her boot, lets it fly and kills him in a single blow.  She eventually ends up in the arms of her tall, dark, stranger lover…the end.

Cut to a “homely” looking Kathleen Turner, crying away at her typewriter.  She is Joan Wilder, novelist.  She has just completed another one of her Romance Novels.

She receives a strange manila envelope in the mail that she disregards at first, until she receives a call from her distraught sister who lets her know that if she does not bring the contents of the envelope (a treasure map) to Colombia, the men keeping her will kill her.

The many things I remember about “Romancing the Stone” are this:

In the 80s, try to make Kathleen Turner look “homely” at all; she’s still more beautiful than most women on their best “made up” day.

Danny DeVito is hilarious, and this was my introduction.

My mom would continue to fastforward through any sex scene, nudity or not.

“Look at those snappers!”

This movie is a smorgasbord of everything Hollywood expects from their blockbusters: beautiful leads, high adventure, subtle moments of brilliant comedic timing (mainly by DeVito), well written dialogue (even the cheesy Romance Novel stuff; it is a wink to us from the writers given the lead character’s profession), larger than life set pieces (the mud slide, the car floating on the river, the Colombian landscapes), and action. 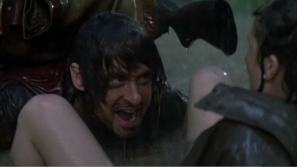 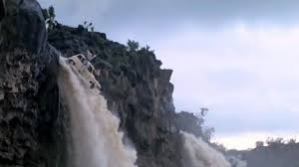 Joan, out of the gate, is not built for these adventures.  Can she write them?  Hell yes.  Can she star in one of her books?  No.  She wore heels to the jungle.  In a rare set of circumstances that only happens in romance novels or Hollywood, Joan runs into Jack “Trustworthy” Colton.  The two are stranded in the jungle, and he agrees to help her get to a phone.

Based on the title, you know what’s going to happen.  When two beautiful people meet in the jungle in the middle of a Hollywood movie…come on.  Romance baby!

The performances by Douglas, Turner, and DeVito are what keep the story moving.

Turner’s Joan is a very delicate creature that only wants to save her sister, and realizes early that she can’t do it alone.  Douglas’s Colton is a cryptic vagabond that wants to do the right thing…or does he?  Hence, “cryptic.”  DeVito’s Ralph is a man put in a situation he’d rather not be in (he is part of the gang that has kidnapped Joan’s sister and has to ensure that she gets the map to them safely).  Ralph of course gets mixed up with the dirty Colombian cop that has tracked Joan from her apartment in America and back to Colombia again.  In the midst of all of that, Ralph is used and abused for our comedic benefit–and we appreciate his labors.  The faces that DeVito can make would seem “over-the-top” or “too big” if made by any other actor.  We buy it every time he widens those dark brown eyes in rage or panic.  Priceless. 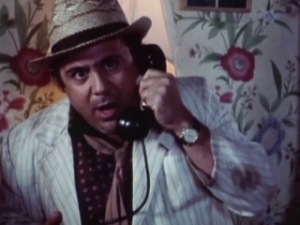 In the end, this movie is full of shenanigans from one scene to the next.  Do we buy all of them? Not really, but we sure as hell want to if not simply for the high entertainment we are put through from start to finish.

Remember, “Look at those snappers!”

11 thoughts on ““Someone’s gonna get killed, and you’re farting around with prehistoric animals.””