It’s no surprise to anyone that I am drawn to movies with lovable losers.

The greatest is “Lucas.”

Mikey from “The Goonies”

Schmendrick from “The Last Unicorn”

All of the characters in “Explorers” (well maybe not Darren)

I’m sure I’ve left out a few and you get the point.  The lovable loser from the next film is pathetic to the point of pity, but he becomes a man of action.  The transformation is so believable and from one of the most unlikely actors to hit the screen.  Martin Short’s Jack Putter in “Innerspace” is definitely a top five lovable loser, all time.  He tape records (that was done on a VCR in the 80s for all of you Mellenials out there) game shows while he is at his day job at a grocery store.  He will sometimes re-watch them more than once.  He is a hypochondriac and displays high anxiety symptoms.  He is in for one hell of a weekend.

I remember watching “Fantastic Voyage” with my mother when I was much younger.  It was made twenty years earlier than this film and shared a lot of the same premise.  In that film, a very important politician has a stroke, and a team of scientists shrink themselves into a capsule that they can then maneuver while riding around inside of his body to find the disease that they will need to destroy.  When I was young, it was great!  It eventually ended up being extremely campy after my first viewing of “Innerspace.”

I’m going to take a line from Inigo Montoya, “Let me explain….no, there is too much, let me sum up.”

Dennis Quaid as Lt. Tuck Pendleton gets involved in an experiment to test a shrinking technology and agrees to be shrunk while inside a capsule and be injected into a rabbit while in a lab.  The villains of the film attempt to steal the technology in the middle of this process, there is a chase, and Pendleton ends up getting injected into Jack Putter’s ass.  It is now up to Jack to help keep Pendleton alive…and Pendleton becomes the voice inside of Jack, literally, of reason, courage, and wisdom.

What a great story.

Throw in some groundbreaking special effects, amazing action sequences, and a lot of suspense and you have a very entertaining 120 minutes. 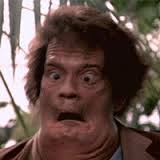 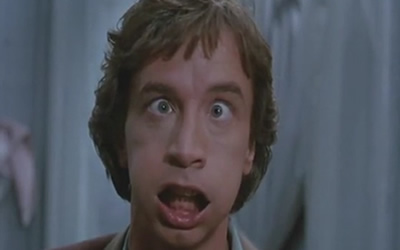 Another notable performance was Robert Picardo as “The Cowboy.”  Picardo is most famous for his role as “the Doctor” on Star Trek: Voyager.  He is an amazing character actor and has had consistent work in Hollywood for a very long time playing henchmen, slobs, wimps, and geeks.  He had the difficult task of giving us a monstrous character with a few minutes of screen time, so that Jack would have enough personality to go on in order to disguise himself and pull off his role as an impostor “Cowboy.”

In the end, I love watching Jack’s slow build of confidence throughout the film.  The screenwriters Jeffrey Boam and Skip Proser gave Martin Short just enough moments to be, well…Martin Short, but also wrote a character that they could bring back down to earth in order to become the necessary man of action.  Director Joe Dante deserves credit for helping to contain Short from making too many scenes slapstick and unbelievable.

I feel the result of all their hard work was an entertaining and exciting job well done.

1 thought on ““You insignificant little pipsqueak, I’m in charge here!””