Prior to watching “Bull Durham,” my experience with baseball in movies was “The Natural,” and “Major League.”  Two very different movies.

“The Natural” was all about the passion and drama that comes with the love of baseball.  Upping the stakes, at a big game to win it all.  Pitching, home runs, the high-light reel, etc.

“Major League” starts off as a screwball and ends up having a shining moment as epic as any baseball scene in sports movies, over the ages.

“Bull Durham,” was somewhere in between the two and was more about taking the glamour out of the game and writing a travelogue of how hard the minor-league life is.  It is a very well written story centered around a woman who fancies herself as a baseball “theologian.”

Annie Savoy (played by a very sexy Susan Sarandon–in this role any way) is a woman that takes it upon herself to “date” one member of the local Durham Bull’s baseball club a year.  She brags that this generally gets them to “The Show,” thus only allowing her one relationship per season. 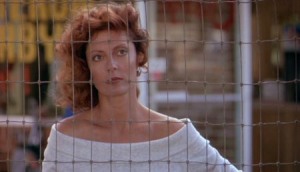 Crash diplomatically relieves himself from the competition with a very poetic monologue, and Annie realizes that her approach was a huge mistake.

Crash and Annie both take on Nuke as a men-tee, with very different tactics, obviously.  Annie is a nurturer/lover and educates him with poetry, spirituality, and “magic” garments…?

Crash is a tough love father figure.  Crash’s nickname for Ebby is way more fitting than “Nuke,” IMO…he even goes so far as to tell the opposing hitter what the pitch will be when Ebby “shakes” Crash off.

I remember this as the first movie I had seen referring to the majors as, “The Show.”  I love that.

The film consists of many well written scenes.  The dialogue is original and witty.  It’s safe to say that writer/director Ron Shelton has spent some time travelling from town-to-town on a few minor league buses.

That is the essence of the movie.  The experience of being on a minor league team.

It is very quotable:

Skip: Eight… and sixteen. How’d we ever win eight?

This scene is of course delivered by the late great Trey Wilson (mentioned in “Raising Arizona“) as Skip and Robert Wuhl as Larry.  I feel it is one of the great moments in movies about sports.  There is purpose to it for all of the characters involved, and at the end of the day, you get a great laugh.  Did I mention that Skip decided to deliver this message when they were all in the shower room after having grabbed a pile of baseball bats–and in dramatic fashion–throwing them at their feet?

Even though there is a lacking in the glamour of baseball in this picture, Ron Shelton treats baseball with the utmost respect.  The title character has made a religion from baseball, and Crash cannot help himself from causing humiliation and harm to Nuke when he feels he “disrespects” the game.

Words to live by…

5 thoughts on ““Why’s he calling me meat? I’m the one driving a Porsche.””