Remember when I mentioned that thing about “firsts?”  Here’s another one.  It’s a little more “abstract” for a “first,” but a type of “first” none-the-less.

This next one was the first one I was allowed to watch, with my dad, completely unedited on VHS.

It starts like “The Magnificent Seven,” and ends up being “Silver Bullet.”

A special military team is sent into the jungle on what is believed to be a rescue mission.  As we start our journey with them, they prove to be a formidable force.

Prior to reaching the enemy outpost, they discover a multitude of concerning circumstances that no one can explain.  There was another team that went missing on the same mission.  The group stumbles along their aircraft, and can find no explanation as to why it was brought down.  They also find a large majority of the team members corpses, hanging from a tree with their hides removed.  They know it is them because of their dog tags.

Bent on retribution now, they invade the enemy hideaway with stealth precision and eliminate all of them with no casualties on their team. 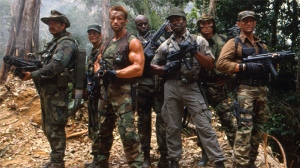 Dutch (Schwarzenegger) finds out that it was anything but a rescue mission all along and he has been duped by an old “friend.”  They have also been cut off from their transport out, and have to take “the long way” around the South American Jungle.

Little did any of them know that this would be the least of their problems.

At the very, very start of this movie, there appears to be a “Mothership” alien vessel that launches a life pod down through earth’s atmosphere.  I always felt that this would’ve been a slightly more interesting movie if they would’ve left that scene out of the beginning.  Jim & John Thomas developed a great script with disturbing visuals and haunting scenes that created a lot of suspense as we watch our heroes trudge along in the forest, only to get picked off one by one.  Being that we as the viewer are in on the “alien invasion,” we don’t get to be in the thick of it with the heroes as much, knowing that they are being hunted by a monster from another world.

Don’t get me wrong, “Predator” is still one bad ass action extravaganza that changed the way I’d play with my G. I. Joe action figures moving forward.  I remember looking at all of the action figures I had, and compiling a team much like the one in the movie.  I would get all of the similar weapons that they had in the movie and match them up with the character’s and pick them off one by one.  The problem was, I did not have a predator action figure, so that was all make-believe (i.e. me).  I still pretty much reenacted this movie when I played with my G. I. Joe’s, predator available or not.

I remember being so thankful that my mom allowed me to watch that movie with my dad.  I could finally share in some of the conversations my friends had at school about the movie.  It also loosened my parents up a little on future “R” rated movies.

…even if it is a little abstract.