This movie was viewed on the down low and never mentioned to my parents.

When you hear the title, you’ll laugh at that notion.  You have to remember that my parents were 80s conservative in Idaho.  That’s like America 50s conservative for the rest of the world at that time…and I’m being generous.

There was A-lot-o ef words used in this movie and slight sexual innuendos (really one scene).

Mom wanted to protect us.

Everyone else I talked to said it was uproarious and I had to see it.

That’s why “heathen” cousins with mom and dads that don’t care what they watch are the best for kids like me in the situation I found myself in.

My cousins rented it and I remember starting it with my cousins, but being that they had already seen it, they were in-and-out as I sat through the entire thing, glued; frame-by-frame.

I remember smiling a lot, laughing out loud, but by the time the film was over, I was satisfied with a very warm, happy ending for an almost begrudging relationship that the two lead characters shared throughout.

It was an underrated masterpiece that I was unaware of in my first viewing.

Damn I wish comedies could get the credit they deserve.

We open with our lead character Neal, sitting silently in a meeting, checking his watch as his superior looks over some photos for an ad campaign.

Neal checks his plane ticket and sees that his flight is at 6:00 and is most likely to miss it if the superior can’t make a decision.  Neal wants to get home for the Thanksgiving holiday.

Eventually we learn that the decision is postponed and everyone is allowed to leave.

This, of course, only upsets our lead (Neal) even more as their presence wasn’t even necessary for the superior to have to come to that conclusion.

Steve Martin is the perfect Neal Page.  Cynical, sarcastic, bitter, and only obsessed with his need to get home in order to keep his wife happy.

Neal has a set of obstacles (we find out later that it has only been one obstacle) set in front of him that impede him from reaching his family in time. 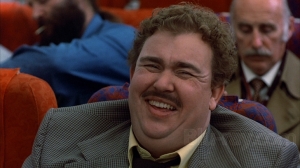 He is a long talking, happy-go-lucky, naivete that has placed his luggage on the side of the street to trip up Neal from reaching his first cab.  He also takes Neal’s second cab while he is bickering with another would-be-cab attendant, and he ends up being his companion in coach (Neal originally had a First Class ticket, but was late and got booted) on his flight back home.

Of course the plane cannot land in Chicago…we’re only 30 minutes into the movie.  Due to the weather, the plane is redirected to Wichita and Neal and Del find themselves as companions on their rigorous trek back to Chicago.

Later in my life I would watch a movie that I loved called “Tommy Boy.”  One of my favorite comedies.  “Tommy Boy‘s” roots are entwined in this movie.  Not the overall plot and arc, but the subtle comparisons with Candy and Farley and the cynical Martin and Spade on a road trip together create a variety of contrasts and comparisons.

The first shared bed, hotel scene (and the morning after) sells this movie undoubtedly.  We are first given an amazing bit of acting from Candy when he is being persecuted by Martin.  His monologue retort is telling and heart-felt, swaying the audience to his side of the conundrum plot.  We then get one of the most funny scenes ever put on film the next morning when the two find themselves cuddling in the queen hotel bed together.

The “between two pillows” line is the quote that is most notably remembered for this movie and rightly so.  But my favorite line comes after that awkward moment.

John Hughes is another creator that we never give enough credit to.

He is always written off as a writer/directer of the “80s teen angst melodrama,” but his filmography shows so much more than that:

Director/Writer = “Sixteen Candles,” “The Breakfast Club,” (I know, not helping my case for someone that is more than just an 80s teen angst supporter) “Weird Science,” “Ferris Bueller’s Day Off,” “Planes, Trains, and Automobiles,” “She’s Having a Baby,” “Uncle Buck,” and “Curly Sue.”  Outside of “Curly Sue,” I enjoy each of these movies.  Some have already been given an essay and some will be given one in the future.  His movies to me always walked on a line of absurdity, while maintaining a seriousness that justified real actions by the protagonists.

I have only mentioned the movies that he wrote/directed.  He wrote original screenplays for:

ALL of  the National Lampoon’s Vacation movies, “Mr. Mom,” “Pretty in Pink,” “Some Kind of Wonderful,” “The Great Outdoors,” “Career Opportunities,” and “Home Alone.”

It’s a shame he passed at age 59.  I get the feeling he had one more movie to “say something” in.