My mom used to talk about movies with my “adopted aunt” Jo Lynn and I’d drop some eaves (thank you Samwise for one of my favorite phrases).

I should mention, my family was a huge Kevin Costner fan…

So there was a period of time where all we rented was another Costner movie after another Kevin Costner movie…not complaining. This was when they were good.

Yes. There was a period of time when that happened. It’s called the late 80s circa early 90s…then he made “Robin Hood: Prince of Thieves” (as if we didn’t know that green hooded asshole was the “prince of thieves”)

Where the hell am I?

Oh, yeah…so I overheard my mom talking to my aunt about this movie and she went on and on and on about how, “wonderful” it was and, “what a great story,” and how it “forced her to pay attention,” and that she was glad that she did pay attention.

So I asked my mom later about it.

“What was that movie you were talking about?”

“With Jo Lynn.  You said it was a great movie.”

I sighed and rolled my eyes.  I didn’t want to say it but, “It had Kevin Costner in it.”

I expected this reaction (I was used to it) so I had to keep it cool and work on her.

This was the first movie that mom REALLY caved on.  By the end of that day with my nagging, she made it happen and we watched it that weekend. I secretly think she really wanted to watch it again with me and get my opinion.  If you think about it, she got to watch a great movie again, and she got see my reaction to a very intelligent twister of a movie. Sometimes watching a movie with your kids for the first time and hoping that they’ll share in your joy and reaction is better than your first viewing.

I think that happened with mom on this one.

I sincerely remember having my first “WHAAAAAAAAAT” moment by the end of that tense movie.

I learned about “plot.” How important it really is and how interesting “plot” can be.

I think I watched it three times that year. 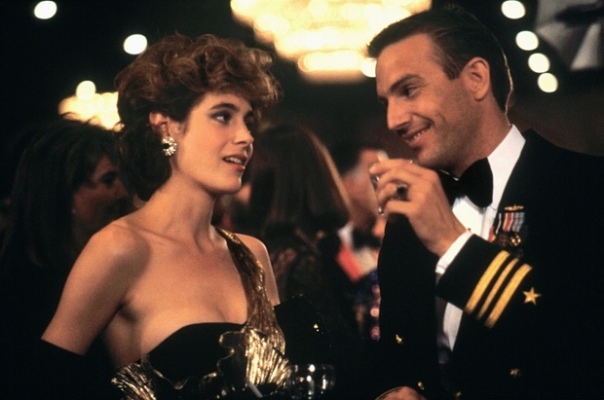 I also learned a little more about the female anatomy (thank you younger Sean Young)…the first time I watched it with mom those scenes were fastforwarded.  In a weird way the fastforwarding made the sex scenes more awkward to watch with your mother if you can imagine that.  It makes it look way more painful than anything and sometimes you cut off the beginning of a crucial scene and you had to rewind and then you were in the middle of the sex scene again and you had to fastforward and mom got stressed out and pushed the buttons harder than she needed to….

“No Way Out” is another one of those movies that I don’t want to mention regarding the story because that would be taking away a very good moment for you if you have never heard of it or seen it.

Oh, except the very cheesy 80s electric piano score…try and block that out.

Other than that distraction, #Great movie!