I have not hidden my deep love for Bill Murray as an actor.  There is something about his charisma that is captivating.  He’s not the best looking guy on the planet, but I feel like he is the most confident.  He feels like a man that’d be a lot of fun if you were lucky enough to be his friend, but he also feels like a man whose bad side you’d never want to be on.

I grew up watching “Meatballs,” “Saturday Night Live” reruns on the holiday specials, “Tootsie,” “Caddyshack,” and of course “Ghostbusters.”

This next one is a Murray feature that I feel is extremely underrated.  I found it very creative, interesting, it kept my attention (I was 13 at the time–not an easy feat) and I also found myself on the ground floor with the main trio as they bounced from one run of bad luck to the next.

The trio are the villains of the feature.

We open with a clown committing a bank robbery at closing time.  He is very relaxed for a man with such a challenging task ahead of him, and he is not worried when the cops show up outside.  Already as a viewer we are intrigued…

I feel like I can go one of two ways here–I can spill the beans on this very creative premise; or I can be discreet and let you experience “Quick Change” for the first time fresh without all of the details of the plot…

Of course the latter.

I will say this though, Murray is the clown, he has some “inside” help at the bank with a very hilarious duo via Geena Davis and Randy Quaid.  They have a very clever plan that helps them escape the bank with the money; but as any great movie does, there are some foils that impede our unlikely “heroes” and the chase is on in a New York city backdrop as an equally clever Jason Robards is the police chief, hot on their trail. 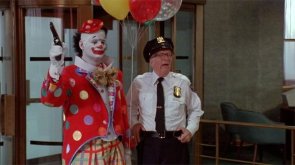 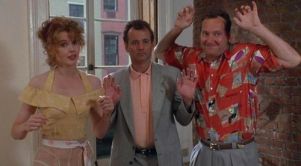 Quaid’s Loomis is one of the most forgotten, great comedic performances by an actor playing an oaf.  As necessary as he is/was for Murray’s Grimm, he sure does create a world of chaos for our trio to dig themselves out of.  We forgive Loomis because he is such a lovable loser; on par with Haim’s Lucas and Broderick’s Gaston. 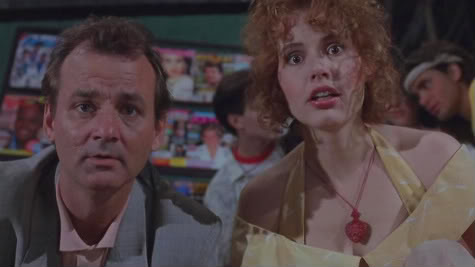 Davis’s Phyllis Potter is everything she needs to be–funny, confident, sexy, and loaded with spunk.

I’ve found that when I mention this movie as one of my favorite Murray features, a lot of raised eyebrows point at my face.

1990 was a pretty amazing year for movies.  I’m not going to get into all of the films that we were fighting to get into that year (I’ve already written about a small sample of them), but when you guys check out the list, you’ll see that there was not a lot of room for this movie unfortunately.  Sometimes box office success can be the luck of the draw–“Silverado” had the same bad luck in 1985.  With all the millions of people that want to go to the movies, when there are ten amazing features in one year, there just aren’t enough seats to go around…1990 arguably had twenty.

I enjoy letting people know about a movie they might have missed that they can try and catch now.

“Quick Change” should definitely make that list and I cannot be more discreet…there is oh so much more to this movie than I have let on.

Give it a chance.  It’ll deliver.