The emotions I went through watching this movie.  That pretty much describes it.

I remember my mother being very excited to share this one with us.  It had Sean Connery in it, so why wouldn’t she…but it was more than that.  I realized after I watch–no, witnessed it–why she was so excited.

It also starred an often forgotten Michael Caine–rarely mentioned among one of the great actors of our time.  He most certainly is and this is one of the films that proves that.

I remember listening to a couple of pretentious, talentless hacks on a podcast at one point (needless to say, I do not listen to their podcast presently and I cannot make note of who they were) stating that Sean was not much of an actor and made a living off of his looks.  I think this was the final conversation that made me stop listening.  It was apparent to me that the two of them had never seen “The Man Who Would Be King.” Even if they had seen it and felt that Connery was not good in this role, showed they had it in for him for being a Greek God any way. 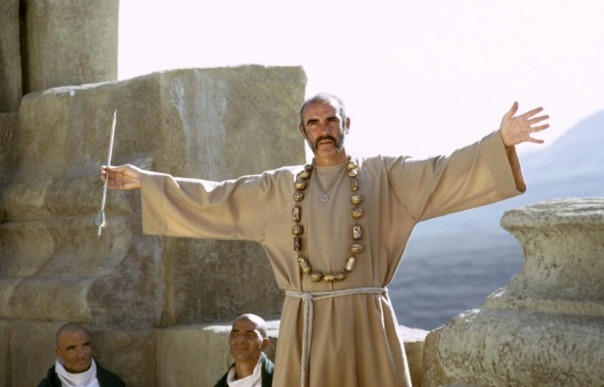 The movie begins with a story being told to Rudyard Kipling. It is told by someone I did not recognize, until he spoke, then I realized he was played by Michael Caine.  Peachy is his name and has to share the tale of his adventure with his best friend, Daniel (Connery).

The story within the story starts off in British occupied India where the two soldiers decide to “escape” the soldiers life and enter a land that “has not seen a white man since Alexander.”  Daniel has a crackpot idea to become their gods, at best, their kings.  And we’re off!  On the road with these two.

Peachy plays the conscience, the advisor, the voice of reason…can I do more phrases that mean the same thing? Yep! Cognoscenti–look it up.

Daniel is the “idea man,” and Peachy is a natural follower, however, he can generally steer Daniel in the correct direction and keep him out of total disaster…generally; key word.

We see this dynamic after their first interaction together in the beginning of the film.  I have always counted Paul Newman and Robert Redford as the gold standard for chemistry on film together.  I stand by that.  Little known fact however; Huston was coming to the end of his career and had wanted to tell this story for decades.  He wanted Bogart and Gable, then Lancaster and Douglas, then Burton and O’Toole.  When it landed on Newman and Redford, Newman recommended Connery and Caine.  Yes, the princes of chemistry relented to the masters of suave.  It is unfortunate that they only ever appeared together in one other film in very small roles (A Bridge Too Far).  We have to remember though, this was back in old-Hollywood when enough of a good thing was “enough of a good thing.”

To see these two men interact with each other as our speaking box together amongst a number of people that do not speak our language is comical, thrilling, and eventually tragic.  Watching the change that occurs in Daniel from the start of the story to the end is something to behold.  A very bright and energetic “idea man” slowly turns into a hypnotized, prideful, monster that eventually takes one thing too many on his journey. 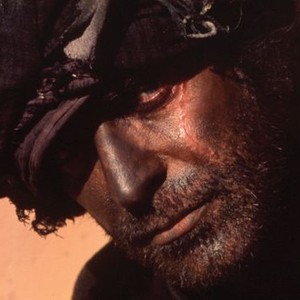 Peachy is the result of this pride.  Daniel’s once best friend who is nothing more than a voice for the story in front of us.

If you have not seen it yet and you are a fan/student of cinema, go see it right now.

It will be beyond deliverance.

15 thoughts on ““Everything’s all right then.””