I have a confession.  I think the Oscars are bullshit and they were put on this earth for two reasons.  One, to make really rich people feel like they’ve accomplished even more in their lives. Two, to ignite a fire of rage and debate in all of us.

I used to think the Academy Awards meant something.  I mean, it was peers determining which of them had the best performance, directing, writing, picture, etc.  They should know, right?  They’re the professionals.  Then you go back and look at the past winners over time and realize that the “true” winners with lasting power were never picked.

“Goodfellas” (I’ll get to this one down the road…)

“Lord of the Flies”

I didn’t even list the ones I’ve already written about.  Trust me, there are plenty.  But…some things I cannot understand.  How did “Dick Tracy” get left out of the best picture mix…?  How did Al Pacino win for “Scent of a Woman,” but get stiffed for his role as Big Boy Caprice in “Dick Tracy?”  Rhetorical really…but I continue to ponder…

To my mind, “Dick Tracy” is the most underrated “comic book” movie of all time.  I did not say it was the best.  I said it was the most underrated.  You know, the one that is G-R-E-A-T great, but you always forget about it when you are thinking about Superman, Batman, Captain America, Spiderman, Iron Man, etc.

Warren Beatty’s vision was a marvel (pun/jab intended) and deserves all the credit that has been thrown it’s way–and more–over the years.

It was visually stunning (throughout every frame).  It was perfectly cast, had a great script, and stayed true to the source material.  I don’t know if it is true, but in my mind, I like to believe that when Warren was a child he grew up reading Dick Tracy just like I grew up reading about Wolverine and Gambit.  He had to.  The attention to detail was incredible.  The lighting, the costumes, the makeup, the sets, the props…it truly was a world that existed in the pictures of a comic book.

The characters were all larger than life and the photos I’ve added don’t display a quarter of all of the great ones. 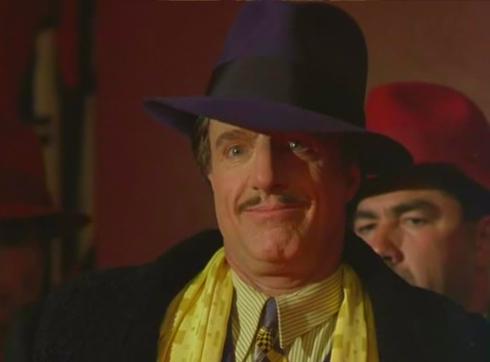 “Dick Tracy” was a tricky movie for my mom.  It was rated PG.  I was old enough to watch it.  I had seen way worse in terms of violence and gore at that point in my life…but this picture had one thing in it that my mother had a hard time with.

Yes.  My mother is not a fan of Madonna.  She was a very “controversial” figure in the 80s. I grew up in a small conservative town…Madonna wasn’t very popular to anyone over 30 in  Blackfoot, ID in 1990.  She was skeptical and encouraged me not to watch it, but she relented.  She, however, refused to watch it with me.

Forget about the technical aspects.  We all know the makeup, costumes, lighting, sets, etc. were amazing.  The performance by Al Pacino is the glue that keeps this picture rolling.  Has there ever been a character that is so dangerous in one second and hilarious in the next?  He boogied with Madonna as Breathless Mahoney, which is meant to be a funny scene…but as you watch the scene unfold, you know that Big Boy Caprice is unpredictable and could snap and break her neck for singing out of key if he felt like it.

There is drama, suspense, humor, action, and a little romance too.  I feel that it is a movie that deserves to be in my top 10 list, but I never count it among those.  It’s probably that guilt from enjoying a movie so much that I know my mother didn’t want me to ever see.