One of Hollywood’s many under-appreciated  actors is in one of my favorite underrated dramadies of all time.

I remember watching “The Hard Way” for the first time with one of my best friends.  He was always a good sport.  He would see movies well before I ever could and he never cared when I asked him to watch them over again with me at my house on VHS.

I remember when we were at the video rental store (yes, VHS…get over it) and I had asked him if he’d seen it–picking up the empty case.

And that we did…

Mr. Fox actually plays Nick Lang–a Hollywood action movie star that is looking for a “real” role of a “real person.”  Something with substance.

Enter James Woods (Mr. Under-appreciated) as John Moss–one stern cop that will be tasked with having the spoiled Hollywood actor shadow him for research.

Moss is all business–tough, smart, focused, and he has a bit of a mean streak in him after working so many years “on the street.”

I remember watching the trailers for Nick Lang’s movies within the storyline of “The Hard Way.”  I know that they were meant to be heavy on the satire…Michael J. is perfect in a role like that.  His charisma in a comedy when quirks are required is unmatched.  His performance in the trailers are campy, but we buy it because it’s Michael J. after all. 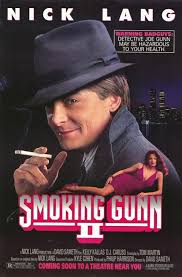 Over the years I have learned to enjoy many of the performances of James Woods.  He is such an interesting actor.  He has the presence to play a leading man and even carry a movie (such as this), but he is great as a character actor as well.

As you can imagine, Moss is very resistant to taking on Lang as his shadow.  Lang is naive to Moss’s detest for him.  I mean, he’s a famous Hollywood actor…who wouldn’t be flattered to have him follow them around all day.  What an honor…

The movie isn’t just another “buddy cop” movie (trust me, I use that phrase lightly).  There is a murderer that Moss has been after for some time.  We get to meet Moss’s love interest and see how she interacts with Lang…I think you’ll be surprised.

Lang’s journey is a real one.  There are real threats, lessons learned, and growth on both sides of the relationship.

I remember feeling like I had seen a very Great! story unfold in front of me.  The film was much better than I expected and I am so thankful that I had a friend that refused to spoil it for me.

…so you know now…

8 thoughts on ““This whole movie is stuff that I said to him!””