Welcome to part 2 of our Point, Counter-Point system.

Tyrone Bruinsma of Tyrone Bruinsma Films and myself.  In our first edition, we both had differing views on “Signs.”  I was “pro,” Tyrone was “con.”  I thought it only fair that I get an opportunity to be “con” to his “pro.”  We agreed on “Fight Club.”

I know, I’m the one guy that doesn’t like it…

With less to say and more to do, I bring you Tyrone’s take first…and mine to follow.  Tweeps, if you’re not following Tyrone yet, please hit him up @TBruinsmaFilms. You won’t regret it….

Fight Club-Satirising and Criticising Toxic Masculinity in the Best Form

David Fincher’s Fight Club upon release was not the box office hit akin to Fincher’s Se7en 4 years prior and received mixed reviews due to its extreme content and stupid men trying to replicate Fight Clubs thinking that the film was life coaching them. Upon revisitation almost immediately after and Fincher’s ascension as one of the best filmmakers currently working today with works like Panic Room, Zodiac, Benjamin Button, The Social Network, The Girl with the Dragon Tattoo and Gone Girl-Fight Club still stands as Fincher’s most popular, celebrated and widely known films. But why? Many people write Fight Club off as a pretentious, too smart for the room violent and misogynistic work…but it’s not and that’s part of Fight Club genius.

Firstly I want to ask a simple question: what genre is Fight Club? Seems like a simple question…but it’s not. Fight Club isn’t’ really a drama, a comedy, a dark comedy, thriller or even art-house: it’s basically a pure film. Now that dedication to not having a genre is part of the point: non-conformity. See at its base level-Fight Club is about the commercialised, corporate, capitalist system 1999 was for many people and criticises it…but the film is also simultaneously a just advertisement for various products-especially Starbucks and Pepsi. This isn’t’ hypocrisy (although it’s a part of filmmaking for product placements) it’s actually part of an underlying theme of “being a counter cultural item will still make you part of that culture” which technically feeds into the larger picture, but first I want to acknowledge where the film is genius before that.

It’s a David Fincher film so yes: it’s a master class in every sense under his commanding direction. Perfect cinematography, editing, sound, acting, visuals, colour grade, pacing and script. Even in his lesser works: David Fincher doesn’t fail…but now for the long breakdown of the singular theme.

So, Fight Club’s theme was a popular one in 1999: the distaste many had for the then current numb and boring lifestyle of the middle class lifestyle in America. A promise since the Reagan era that had been mostly granted by the Clinton administration was now a point of criticism and four movies from 1999 did just that to different degrees: Office Space was a comedy that mocked the then average 1999 work space, The Matrix was about a system that made you conformity to numb modernity and letter reassessed as a Transgender narrative where the numb system supressed your true identity and American Beauty…didn’t really have a point. For all the praise American Beauty got-it doesn’t’ really have a point, it’s just an above average drama, but it’s pretentious in trying to frame a plastic bag as beautiful and paedophilia as a heroic trait…no really American beauty did that. So what did Fight Club criticise? Well most of these types of narratives were about (and for) mostly middle aged, middle class men and how they should feel angry over being just a “cog in the machine” of capitalist consumerism and encouraged them to rebel…and Fight Club shows the toxic masculine stupidity in that. To use American Beauty as an example: Kevin Spacey’s character quits his job in an insulting rant, needlessly spends on commercial products (an actual hypocrisy) and basically causes stress and pain for his family…thinking he’s entitled to it. Fight Club’s conceit (especially in the character who is the ego

personified of every unfulfilled male of the period and even now) is to show how men with stable jobs, good homes and with no real problems-thinking that lifestyle is a prison and deciding to rebel in the form of a destructive, self-destructive, violent, misogynistic outlet…are toxic males with the biggest false persecution complex. Seriously: all the men in Fight Club have jobs to sustain themselves, needless expenses and their injuries, enough free time to speed fighting and the resources to commit their terrorist plans…and think they’re oppressed class.

And yes, that’s Fight Club’s brilliant little message: if you think that having a stable job, nice home and tons of disposable income means you’re opposed to the point you’re entitled to bring down the “System that has taken advantage of you” through violent, aggressive, destructive and un-intellectual means (and it being ok to be sexist, misogynistic and overly concerned over masculinity), then not only are you feeding the system and allowing it to co-opt you as a tool or an example…but you’re practically a Nazi at that point. Seriously, if you look on it: blaming the “failings” of something you’re a part of on something that never really hurt you and becoming overly aggressive, singular minded drones who are taught to have no purpose is basically tying the mindless rebellion of people doing extremely well to the rise of the Nazi party. And even on individual levels: it’s still saying to every entitled man who feels his hum drum life isn’t fulfilling enough (even though they could do more productive things and afford to) and gives into his ultra-toxic masculine ego as a destructive force is an idiot and makes fun of them for it.

In the truest sense: Fight Club is a satirical film…but it’s not really mocking a genre-its mocking toxic masculine culture. Now-is this a highly summarised version of this argument? Yes-because 800 words is enough to explain it and any other digression would have to be book length (note to self: write book length breakdown of Fight Club). But, next time you watch Fight Club-try and see all the points it makes in criticising toxic masculinity, egos and the connections to consumerist culture. And I get if some people feel it’s a bit over praised and think the violence is too much…but can I stop and ask some of the people who think this movie glorifies violence to remember “Depiction doesn’t not mean endorsement”. Scarface doesn’t endorse drug use, Irreversible does not endorse rape, Starship Troopers does not endorse fascism and Fight Club doesn’t endorse violence. Please understand the context and criticism, because a review bashing a movie isn’t’ an endorsement-that’s only when a critic praises a movie…like how I’m endorsing Fight Club right now.

Well, here we are.  Wasn’t sure if I’d ever do this, but here is my first critical review.

Where to begin with “Fight Club”….

I was the only person in the station that didn’t fall for this movies’ slick charms.  You must know these facts before I go further: 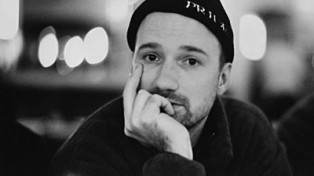 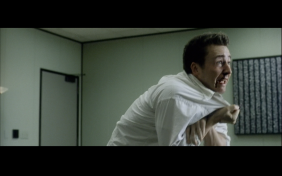 1.I am one of the few people that has always enjoyed Brad Pitt.

2.I LOVE Edward Norton, he was my favorite “up and coming” actor in the 90s.

3.David Fincher’s “Se7en” is probably my most favorite cinematic experience I have had as an adult and his “The Game,” is one of the most underrated thrillers of all time.

I feel that it’s a movie that got too comfortable fawning over itself with how clever it felt it was.

Some positives I’ll admit this film has:

Say what you want about Fincher, he knows how to frame a beautiful movie.

It offers a number of major belly laughs.

Where I got lost with this movie was the pacing…it starts out great.  We meet our lead (Norton as the Narrator), he has a great voiceover for his thoughts in the moments we share with him.  The orange juice scene still leaves me with more questions than answers (and this is not a complaint). We meet Tyler Durden (Pitt), an electrifying, captivating, energetic character that says and does all of the things that we are thinking, but don’t have the balls to do or say…then we start the actual fight club and instead of heading in a meaningful direction, the movie sort of takes a snooze until the last fifteen minutes of the movie when the Narrator starts to put some pieces together…

I like violent movies…when I am invested in a story among characters that I care about and when the violence can create tension and drama…I stopped caring about the Narrator and Tyler when they decided that the best way for them to figure themselves out was through violence on each other and their fellow men. There is still something very disturbing and wrong to me with the scene in which the Narrator watches two men beat each other’s faces into hamburger, while on the ground, hugging and laughing with each other after…I felt a total loss of any interest–if any that I had–or care for the Narrator and Tyler at that point…I was committed though and made my way through it.

In the end, I feel that this is definitely a movie that will be talked about for its “moments.”  The few that I remember:

The “fat scavenging” at the plastic surgery waste sight-

The Narrator fighting and kicking his own ass-

The conclusion and closing line-

I think that people were overjoyed with the moment of truth and felt that it was very clever and shocking.  It kind of annoyed me as I was mentally preparing myself for way more creativity and found that it was disappointing.

That being said, I always feel that good or bad movies should be watched.  Don’t let me sway you, I’m in the minority here after all…you might enjoy it so much that you will do an annual viewing after you have participated in your own annual fight club that you have set up with your friends (if I have to mention it, it happens).

Once was enough for me.